Hunkar Laboratories offers a wide variety of valves for use in the blow molding process. Below you will find useful information on the Hydro-Jet 2 valve

Hunkar Laboratories presents the latest innovation in blow molding  Servo Valve technology.
The HYDRO-JET 2 dirt tolerant valve is so stable it now requires NO Null Adjustment. HYDRO-JET 2 has a null stability of 5% of rated current throughout its entire useful life, so it does not require any null adjustment. Additionally, the first stage jet-pipe within the unit will pass 130 micron particles without failure.

The HYDRO-JET 2 has a resolution of ¼% of rated current, delivering substantially improved precision
compared to other jet valves used in the industry today. The efficient four air gap torque motor drives the jet-pipe hydraulic preamplifier and controls the second stage spool. HYDRO-JET 2 has been developed and constructed to withstand the most demanding plastics blow molding applications. 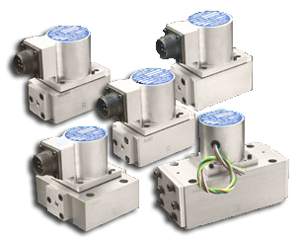